Parametric test of group differences. It is used when:

Used when the observations collected under one treatment condition are not related to the observations collected under the other treatment condition. For example, the independent samples t-Test is used when randomly selected subjects are exposed to two different experimental conditions (IV) and we want to know if the two groups are or are not different on some characteristic (DV).

The following assumptions must be met to use the independent samples t-Test:

Data normality can be verified by looking at the distribution of the data (histograms) or through a test of normality. F or Levene’s tests can be used to test equality of variances.

An example: consider studying the differences in height between males and females of the homo sapiens species. We measure 100 individuals, 50 females (F) and 50 males (M). An excerpt of the height measurement data is presented in Table 11.1.

The null hypothesis (H0): In the population there is no difference between male and female heights.

The first step in data analysis is to familiarize oneself with the data. So, let’s take a look at the some summary statistics.

As an example, we will work through the most common options to test the normality of a dataset. 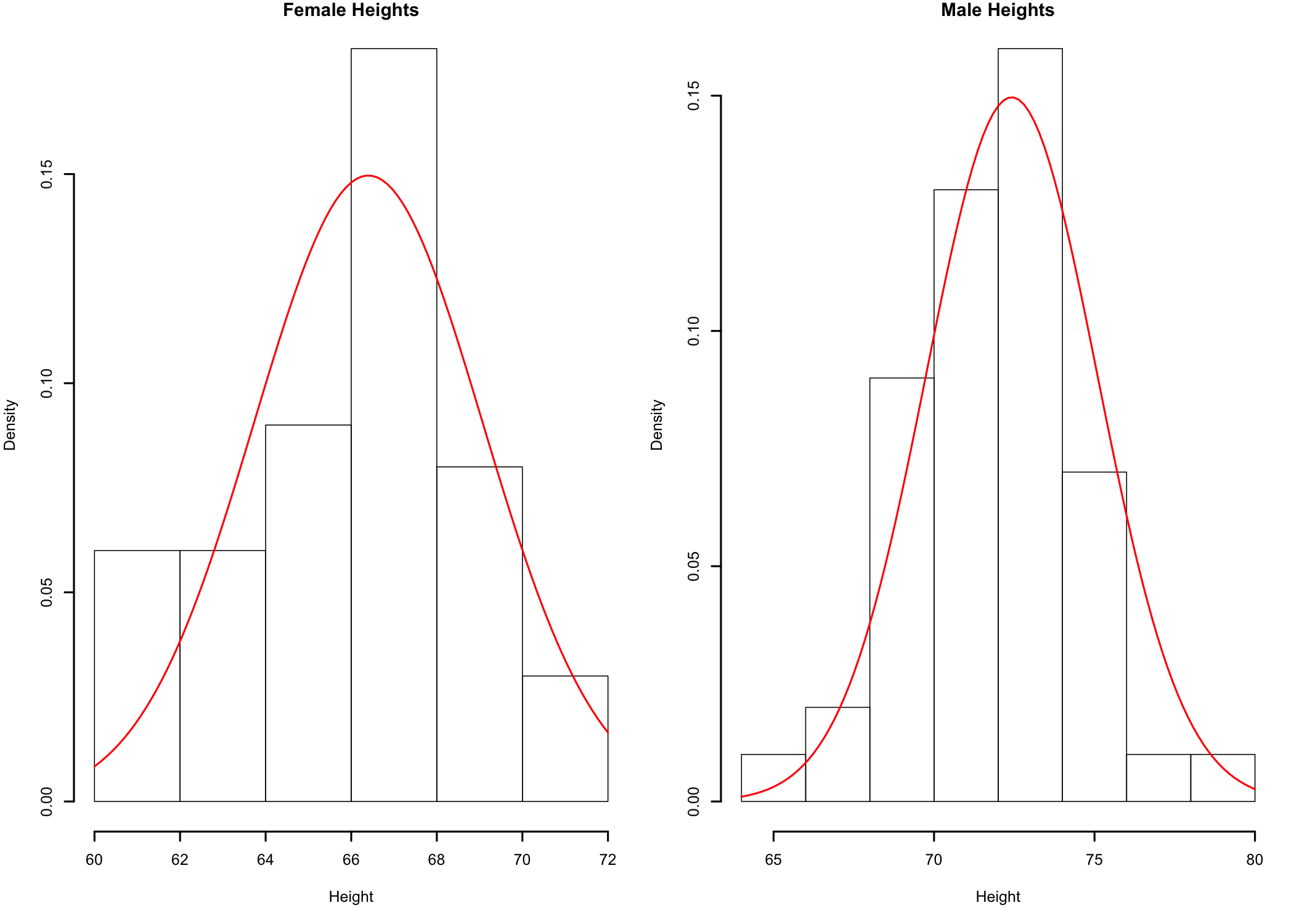 Based on the histogram plots (Figure 11.1) the data seems to be relatively close to a bell-shaped distribution90 The histograms for Males and Females may look different because of possible differences between the number of bars used to represent the data. This is due to the way R computes the number of bins to use for data representation of a data set.. In this case, while the resemblance to a bell shape may be more difficult to observe, it is because of the small number of data points available for analysis. The more data points in the sample, if the sample distribution is close to the normal distribution, the closer the histogram would be to the bell-shaped curve of the normal distribution. While the visual checks are fine, let’s take a closer look at sample data normality. 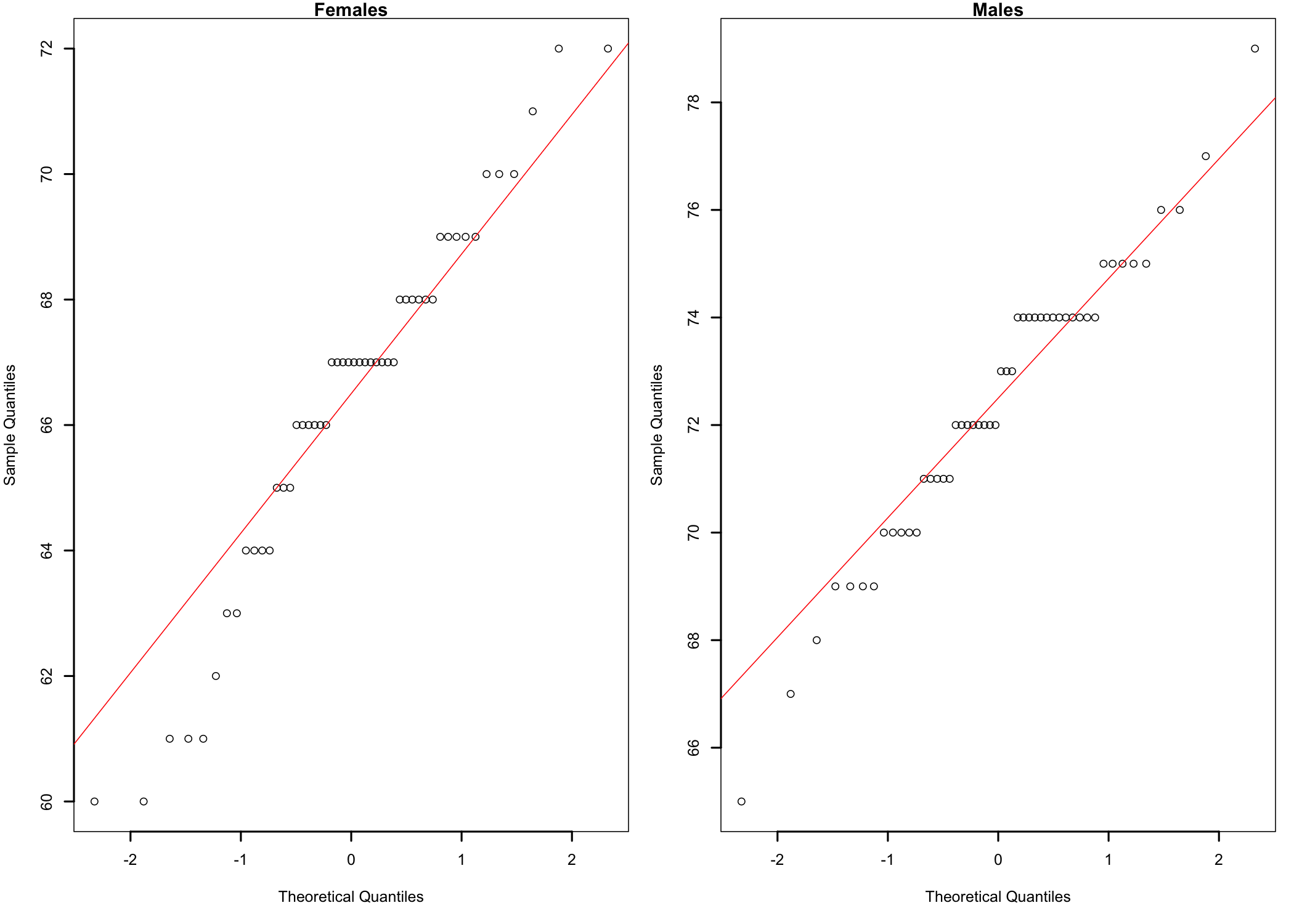 As Figure 11.2 shows, the data points form a fairly straight line for both males and females, which suggests the conclusion that the sample data for the two groups is normally distributed. The slight S-shaped curve is an indication of some departures from normality, but a visual inspection comparing the data points curves with the red straight diagonal lines suggests that these departures are not significant. Nevertheless, to be sure, let’s not rely on visual clues alone.

The data in Table 11.2 shows that for females the data is slightly skewed to the left and playtkurtic (kurtosis < 3). The sample of males shows a similar situation. While numbers offer a bit more detail than visual representation, let’s go a step further and test data normality using a more specific statistical test.

A p-value > 0.05 indicates that the null hypothesis cannot be rejected and therefore it should be concluded that the samples follow a normal distribution.

The output shows the probability p (p-value) that the t statistics would be this large or larger in absolute value (without the - sign) if the null hypothesis is true. For this analysis the value of p is so small91 The value of the p-value is so small that R considers it, for the purpose of this test, indistinguishable from 0 and thus represented as 2.2e-16 (0.00000000000000022). R can represent smaller numbers, but for all intents and purposes, unless one needs to work with very, very small p-values, this value can be effectively considered equal to 0. that there is practically no chance that the null hypothesis is true. Therefore, the conclusion is that, on average, there is a significant difference in height between males and females.

Finally, here is an example of how to write up the results in a publication.

The paired-samples t-Test is used when the observation collected from one group is related in some way to the corresponding observation in the second group. Some examples of studies where this test would be appropriate: