Most statistical tests rely on a set of assumptions about the data they are used to analyze. These assumptions ensure that the test performs as expected and that the results can be interpreted with a high degree of confidence. Understanding when and how these assumptions lead to biases in analysis and what the consequences are is essential to meaningful data analysis.

For example, many tests65 E.g., Linear Regression, ANOVA. assume that the data is normally distributed. While these statistical tests vary in how well they can deal with departures from normality, if the data does not follow a normal distribution, the results provided may not have sufficient power to explain the phenomenon properly and therefore is important to confirm before hand that if the analysis is conducted the interpretation is valid. In situations in which normality is not observed it is usually possible to find a different statistical test that is less sensitive to departures from normality.

What is important to remember is that each statistical test functions better when certain conditions, established by those who developed the test, are met. Therefore, assumptions need to be tested to make sure that the statistical test is appropriate to be used for the data set.

The most common parametric statistical analyses expect the data to be normally distributed and homogeneous.

To study the normality of a data sample we use the skewness and kurtosis of the sample’s distribution to determine its departure from the theoretical normal distribution.

Although largely arbitrary, in most situations a simple rule of thumb of ±1 can be used to interpret the sample’s distribution skewness. If skewness is either greater then 1 or smaller than -1, the distribution it is computed from shows a significant departure from symmetry.

Visual checks can be used to assess, roughly, how close the sample’s distribution is to the normal distribution. This can be accomplished using Quantile-Quantile plots (qq-plots) that help visualize if a set of data comes from a theoretical distribution, the normal distribution in this case. In essence a qq-plot is just a scatter plot of two sets of quantiles, theoretical and observed, as they relate to each other66 Quantiles, also known as percentiles, are points in the data that divide the observations in intervals with equal probabilities. In essence, quantiles are just the data sorted in ascending order.. If the sample came from the desired distribution, the plot will roughly approximate a straight diagonal line. Any departure from that shape is an indication of departures from normality (Figure 7.3).

Visually inspecting a qq-plot does not offer an exact and definitive proof that the sample data comes from a normal distribution. Nevertheless, it can be used to determine if further testing is necessary. For example, if the qq-plot has an S-shaped appearance, the sample data may be skewed. 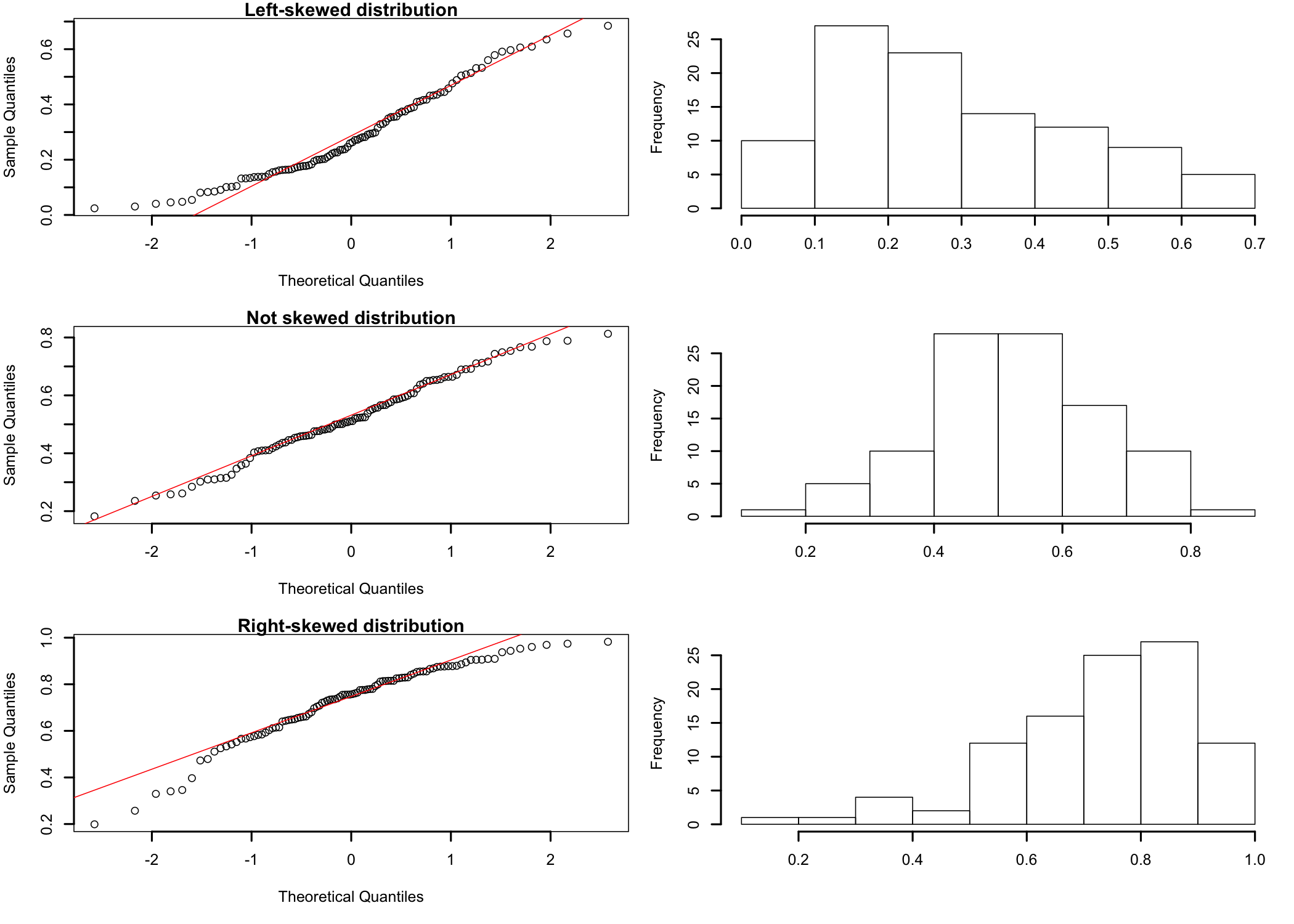 Visual checks, while helpful, cannot be relied upon in most situations. Therefore, there are more specific tests that can be used to perform a more formal evaluation.

D’Agostino-Pearson omnibus test - Uses test statistics that combine skewness and kurtosis to compute a single p-value. This test has a tendency to hyper actively reject normality for small samples for which reason is not recommended to test normality of samples less than 20.

Kolmogorov-Smirnov test - Non-parametric test used to compare two samples that can serve as a goodness of fit test. When testing for normality for example, the sample data is standardized and compared with the theoretical normal distribution. It is less powerful than some other tests, such as Shapiro-Wilk.

Shapiro-Wilk’s W test - Tests the null hypothesis that the data in the sample is part of a normally distributed population. The test computes the value of the W statistic and a p-value probability. Considering the commonly accepted 0.05 value for p, any computed p-value greater than 0.05 indicates that the null hypothesis cannot be rejected and therefore it should be true and that the assumption of normality is upheld. Does not work well for samples with many identical values.

Chi-square test of goodness-of-fit - Looks at a single categorical variable from a population and attempts to assess how close to or consistent with a hypothesized distribution the actual distribution of that varialbe is. See Goodness-of-Fit Test for more details.

7.3 Homogeneity of Variances or Homoscedasticity

So, why is it important to test it? Many of the most common tests in statistical analysis67 For example, ANOVA assumes that observations are randomly selected from the population and that all observations come from the same population (or underlying group), with the same degree of variability, following the same distribution. are part of a category of tests called general linear models. These models are linear in the sense that they add things together. To be able to add things together, these tests assume that the distributions of the things being added are the same. Otherwise, if distributions are not the same, the results/estimate and the conclusion could be biased (usually overestimation of goodness of fit), therefore effectively rendering the test results unusable.

In case of ANOVA, for example, if the variance of separate groups is significantly different, the p-values the test computes are no longer accurate because they are calculated based on the fact that certain results occur if the null hypothesis is true.

Let’s look at a few of the more common tests one can use to investigate the homogeneity of variances.

Bartlett test for homogeneity of variances - Tests the hypothesis (null hypothesis) that the variances in each sample groups are the same. This is the preferred test if the data is normally distributed, but it has a higher likelihood to produce false positive results when the data is non-normal. Therefore, Bartlett’s is preferred when the data comes from a known normal or close to normal distribution.

Levene’s test - A more robust inferential statistic alternative to the Bartlett test used to evaluate or assess the equality of variances for a variable that has two or more groups. If the computed p-value is less then the set significance level68 E.g., the usual 0.05., the sample variance is unlikely due to random sampling from a population with equal variances. Therefore, the null hypothesis that the variances are the same is rejected. The Levene’s test is less sensitive to departures from normality than Bartlett’s.

Fligner-Killeen test - Non-parametric test, robust for data sets with departures from normality. Can be useful if the normality of the sample data for groups is not observed.

Outliers, extreme values data depart significantly from the majority of the values in the data set, can have substantial influence on the results of a statistical analysis. For example, they can skew the sample distribution to such extent that its departure from normality makes a large number of parametric statistical tests that require the data to be normal no longer applicable. Or, when present in many real-life time series data sets can significantly alter the outcomes of the analysis. For example, when analyzing an economic phenomenon, a hurricane affecting some link of the supply chain can produce a specific and significant change for a short period of time, which can influence the understanding of the phenomenon in average conditions.

Figure 7.4 shows how outliers can influence the shape of the dataset’s distribution. The graph on the left shows a set of normally distributed data69 The same data used previously in this section to discuss skewness. For this graph the data ranges between 0 and 1.. The graph in the middle represents the same data set to which two data points were added as outliers70 For exemplification, one value, 2, was added to simulate a possible outlier. The point is located outside the range of the original dataset.. A visual inspection shows how the addition of the two outlying data points “pushes” the distribution to the left, away from the shape of normally distributed data. The qq-plot in the graph on the right shows how the two outliers influence dataset normality.

Most of the times outliers can be identified visually, in graphical representation such as scatterplots (Figure 7.5 left), box plots (Figure 7.5 right), or mahalanobis distances71 The use of mahalanobis distance is better understood in context. See the outliers section in multiple regression.. In scatterplots outliers are represented as points plotted away from the “cloud” formed by majority of the data set. In box plots72 Also known as box-and-whisker diagrams, are used to represent data graphically based on quartiles they would be indicated by individual points plotted on the graph. Mahalanobis distances73 Mahalanobis distance (MD) is the distance between two points in multivariate space. It measures the distance relative to a base or central point considered as an overall mean for multivariate data (centroid). The centroid is a point in multivariate space where the means of all variables intersect., when represented as a histogram, will indicate the possible existence of an outliers by the presence of bars at the right side of the graph.

Linear regression presents itself as one of the better ways to explain how outliers can influence the outcomes of the analysis because these extreme values can substantially influence the slope of the regression line74 This, in turn, will affect how well the regression equation will fit the data and the correlations coefficient. A single outlier can decrease the value of a correlation coefficient to the extent that the analysis rejects the existence of a real phenomenon.. In figure 7.6, the left side shows the data set without outliers and the right side shows the data set with one added outlier. Visually, the slope of the regression line (in red) changes from negative to positive when the outliers are not removed from the dataset. The change in slope may look small in the image below, but it could be significant in the analysis.

The way outliers are approached depends largely on the type of analysis being conducted and the type of data being analyzed. So far a widely accepted numerical method to deal with outliers does not seem to exist. Therefore, while in this resource approaches to outliers will be discussed when relevant to the statistical test and example, there are few guidelines that may be helpful across tests.

Outliers investigation is highly contextual and the criteria used for analysis ranges from theoretical necessity to common sense. There are legitimate situations when automatic (mathematical) removal of outliers makes sense. For example, when studying people reaction times to some stimulus and the vast majority of data points are in the milliseconds range, values in the seconds range most likely indicate distracted participants and therefore they could be safely removed. Alternatively, in situations where outliers consistently show up across groups, design cells, or successive measurement, they could indicate the existence of a different phenomenon than those under direct study. When their presence is detected, each outlier should be investigated individually and a decision made if it should be corrected75 For example, in situations when the existence of an outlier is due to improper data input., removed76 In cases when the data point is determined to be an aberrant measurement., or retained77 When the outlier proves to be a true measurement and there are practical and/or theoretical reasons to be included in the analysis. in the analysis.